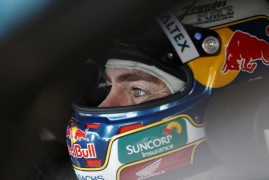 Tyre issues were the story of Craig Lowndes’ Virgin Australia Supercars Championship round at Phillip Island (Victoria) on the weekend.

On Friday, a tyre failure in practice pitched the TeamVortex Commodore into the barriers, triggering an overnight rebuild of the heavily-damaged #888 racer.

Then in Sunday’s race 6, Craig suffered another puncture in the closing laps while running a strong fourth and was then forced to crawl back to the pits, losing a lap and finishing 23rd.

Saturday’s race 5 saw Craig first across the line, but a time penalty applied because of a rule infraction dropped him to 12th.

“We take a lot of positives out of this weekend. We rectified some issues, we got the car back up and running after the crash on Friday and we had a very fast car. We need to analyse the tyre failures, but we weren’t the only ones to have that problem.”

“We were making good progress with the car in practice one, we made a few setup changes and the car was working really well. We’ve got to understand what caused that front right tyre to blow and that’s the main objective from today. The car was working alright up until the crash. We hadn’t had a chance to put our second set of tyres on, which we were about to. We’ll go into qualifying tomorrow after gaining more of an understanding from the Red Bull Holden guys next door, to make sure we get it right. The team is doing really well putting the car back together. The good thing is the main structure of the car is in good condition. It’s a shame that we don’t get a chance to give the car a run before tomorrow, but that’s the way it is. I’m confident that we’ll do our best in qualifying.”

“We qualified the car as well as we could, knowing that we lost a session yesterday due to the crash. We didn’t quite have the balance we wanted, didn’t maximise it as much as we’d like.

“Starting 15th, we tried to stay out of trouble. We got caught up in the incident at turn two at the start and I actually got stuck in reserve. I couldn’t get it out!

“Once we got going the car was really consistent. What the team did overnight was sensational and to have a fast car today was even better. It was consistent and looked after its tyres when everyone else was blowing them, so we’ll take a lot out of today.

“The ending was obviously disappointing to get that 15 second time penalty. We know we had a fast car – I think we definitely could have been on the podium today. It’s disappointing, but we’ll take the positives, regroup tonight and look forward to tomorrow.”

“Qualifying was much better today, we had a much nicer car. We’d settled the rear down from yesterday and qualifying seventh was obviously a lot better. We kept out of trouble at the start of the race and had a really good run up until the last few laps, when the tyre failed. But the car was working extremely well, the guys did another great job of strategy. We were pushing hard towards the end – whether the tyre failed as a result of that, we don’t know yet.”