A 1, 2 DOUBLE PODIUM FOR LOWNDES ON THE GOLD COAST 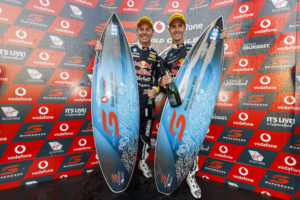 It was a stong showing by Lowndes on the street of Surfers Paradise for Event 13 of the Supercars Gold Coast 600. Walking away with two surfboards following a win on Saturday and a second place on Sunday, alongside Team mate Jamie Whincup.

Still beaming from the weekend Lowndes said “my role was to support Jamie and I think I did that pretty well this weekend. He did a fantastic job both days, qualifying on the first row on both Saturday and Sunday. Both days I got good… no make that cracker starts; I was really happy with that side of it. The car today was solid on both days, it rode the kerbs well and looked after its tyres. I just had to look after it and bring it home in a strong position. We opted to do a little bit longer run in the Sunday race, which gave us a fuel advantage but at the end of the day car 97 was really strong. Credit to all the team to have a one-two both days, it’s really something special. It doesn’t happen that often and to be able to bounce back the way we have this weekend is a credit to everyone.”

Lowndes returns to the track for the final round of the Supercars Pirtek Endurance Cup at the Sandown 500 8th-10th November.